What a fantastic line up we have for you!! Let’s have a laugh!! Join us for a great night of comedy food & drinks! 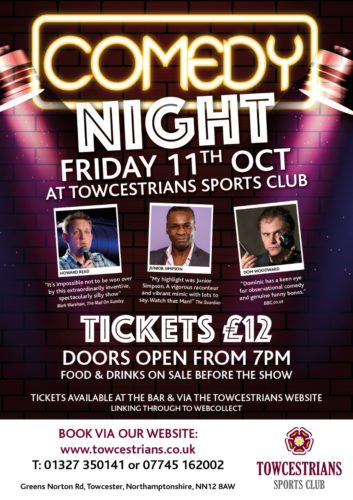 Howard Read is a comic, writer, animator and actor, in that order. He is best known for being one half (and the other half), of the Big Howard, Little Howard, the world’s first human cartoon double-act. He is also an acclaimed stand-up comic, writer, author, illustrator and animator. As a Stand up Howard Read is brilliantly off the wall. Totally silly, songs and jokes and stupidness. The man is a baffoon of the highest order. And in this business that is a good thing.

With 15 years experience on the UK circuit, Dominic Woodward is a safe pair of hands and a whole lot more. He’s cheeky, charming, full of energy and hilarious. A regular performer on the professional stand-up circuit, Dom charms audiences as he paints images of the quirky people he meets. Always in demand as headliner, he performs regularly all over the UK and overseas. He has performed live on BBC 2 and ITV and was a regular in MEN@Work The Comedy Store’s topical show in Manchester.

With his infectious energy and huge stage presence, it is easy to see why Junior Simpson is a circuit favourite. Simpson has a boundless joy and exuberance that has audiences hooked with hilarity. A true observational comic, Simpson finds his humour in the everyday and humdrum with anecdotes of his world travels as a comedian adding a personal originality to his set. Although mischievous and daring, Simpson is never crass or crude and can tailor his set to suit any audience making him a favourite for warm up, TV and corporate work.